SUNDAY SLICE: When a Picture Doesn’t Paint a Thousand Words

If you are a cake decorator in business, you are probably aware that there has been a lot of photo stealing in recent times.

There’s a minority group of decorators who are taking photos belonging to other decorator’s, and passing them off as their own on their social media pages. Journalist Marianna Saran did a bit of investigating into this issue to find out the reasoning behind their actions.

When a Picture Doesn’t Paint a Thousand Words. By Marianna Saran

They say a picture paints a thousand words, and when admiring pictures of phenomenal cakes they do. Personally they paint me a picture that an artist is talented, has an amazing eye for detail and is fantastic at creating their own original concepts and designs. But I ask you, what if the cake picture you were staring at, painted you the same picture as just described, but was tarnished with deceit?

Talented cake artists are emerging every day in a rapidly growing global caking community. It’s made the business of cake decorating even more cut throat. But how far do you go to stand out from the crowd? Some have taken it to a new level. In a scarily rising trend, a minority of cake decorators feel so pressured that they have started taking pictures from world renowned cake artists, removing their watermarks and passing them off on as their own.

They feature the stolen images on their own pages and websites, giving clients false hope, that they can reproduce these meticulously crafted, majestic cakes. It really is a case of buyers beware. I can’t comprehend this high school like behaviour, and decided to investigate the reasons why people feel the need to do it. 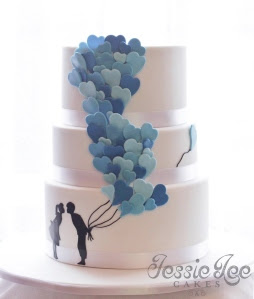 One of many victims of this type of scandal is Jessie Lee Cakes. She was recently notified that her cake had appeared on another decorator’s page- but proudly sporting this decorator’s watermark. “I was angry, I was even shaking. All I could think about was how am I going to make this person take my cake down, and who would do something like this?” Jessie told Marianna’s Caking Me Crazy.

Jessie was deeply hurt that someone didn’t think twice about claiming her cake as their own “It takes days, sometimes weeks for us to make these cakes and we put out heart and soul into each one. For you to go and so something as easy as stick your watermark over my photo and pretend it’s yours, makes all that effort I put into making that cake seem worthless.” I gave the decorator in question the opportunity to explain their actions, but never received a reply.  It’s not only small business’ such as Jessie’s that are affected by this dishonour.

High profile cake decorators have also fallen victim in recent weeks. Rosie Cake-Diva had a picture of an extravagant wedding cake stolen, the flowers alone on this cake took a lengthy 300 hours to make. Rosie said “There is no reason why other people can’t reproduce my cakes to the same standard. In a lot of cases I use YouTube and Facebook to show people how to do it. But although I have always welcomed people using my designs as inspiration it is nice to get a credit….and a whole other ball game to pretend my cake images are yours”. 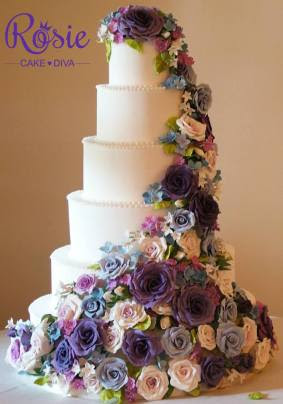 Rosie believe’s that cake decorators who practice this unethical conduct could potentially shut up their own shop. “When cake decorators steal images it can only be for a short term gain. They stand to lose their reputation when others realise that they aren’t genuine, and they set themselves up for a mighty fall if their customers are disappointed with their standard. It’s a foolish thing to do”.

Through my research into this matter, I was even more astounded that there are actually not one, but two different types of offenders. There’s those as I just described who blatantly take a photo and claim it as their own. Then there are a handful of decorators who are completely ignorant that their actions are affecting others.

One decorator, who was guilty of putting other people’s photos on her website, believed she wasn’t doing anything wrong.  When I questioned the reasoning behind her actions she said“I’m just starting out this is why, I haven’t been able to create a large portfolio of cakes yet, I do believe I can create similar cakes to those shown and I don’t state anywhere that these are cakes done by me, it’s simply a gallery of what may be possible”.

After I brought to her attention that it is a little misleading to her clients, and disheartening to those cakers who have put in the hard yards to produce these stunning cakes she replied “I understand how you could get that impression and I will rectify this today by making a statement on my site, thankyou”.

Unfortunately there are no caking police to monitor hundreds of thousands of cake pages, to ensure business is all frosting and sprinkles. So the stealing (or borrowing as some believe they are doing) of pictures is likely to continue. Hopefully the majority of cake enthusiasts will continue to do the right thing, and give credit where due.

As a former news journalist and mother of two, Marianna Saran has taken her passion for writing and cake decorating and transformed herself into a new aged cake journalist. She loves to blog about her cake and cookie creations and tries to push herself to explore new mediums of decorating, even though some are quite intimidating at times. Interviewing renowned cake decorators from across the globe gives her a spark of inspiration as she hears their stories. It reminds her that in life all you need is love from your family and friends, a cookie in one hand and a piece of cake in the other! Sit back and enjoy the journey as you follow Marianna on a roller coaster of sugary creations! Check out what else Marianna is up to at her blog and on Facebook.http://mariannacakingmecrazy.com/ and https://www.facebook.com/MariannasCakingMeCrazy